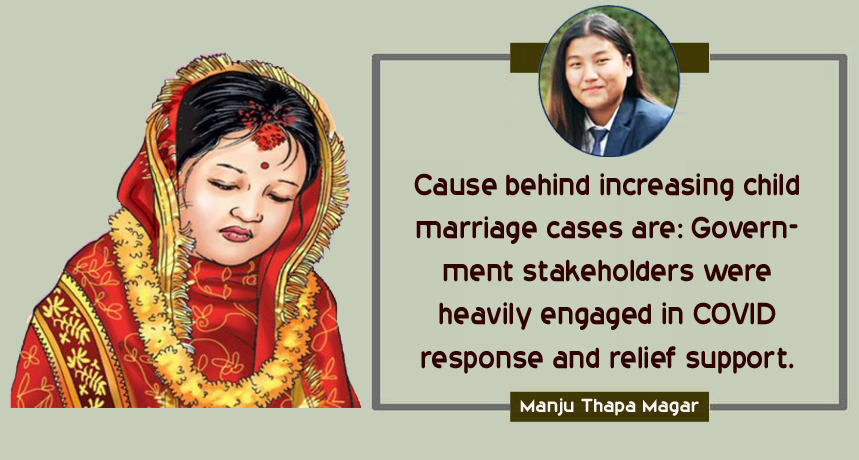 Child marriage is defined as a marriage that takes place before the age provisioned by the constitution and law of any country.  According to the constitution 2015 and criminal code 2074 B.S. of Nepal, the legal age of marriage for boys and girls is 20 years. Marriage before 20 years is considered as Child marriage. If marriage is take place either self or in force of parents and other guardians, it is punishable. Criminal Code has provisioned 3 years imprisonment and Nrs. 30,000 penalty.

In most of the Terai districts, girls and boys are taken to India for getting married before 20 years because of the open boarder and legal provision of India that is legal age for marriage is 18 years old. In 2019 and 2020, child marriage cases were reduced in collaboration of adolescent girls club, Public representatives, Police administration, District Coordination Commiittee, media and CSOs working against child marriages. But, in lockdown period caused by COVID 19, child marriage cases seems increased. Around 60 child marriage cases have happened during the period of lockdown. Cause behind increasing child marriage cases are: Government stakeholders were heavily engaged in COVID response and relief support.

They were not paying attention towards the social malpractices as GBV/child marriages. Police administration were also engaged in controlling people and response and quarantine management. They were not taking action against the malpractices even the adolescent girls were reporting it to police and public representatives.  Also, high enagagement of gilrs and boys in social media plays role of imphatuation and it turned into child marriage during the priod. Youngsters felt isolated and they had no school, colleges and freedom for strolling outside. Thats why, they get engaged in chatting with opposite sexes in different means of social media like Facebook, Viber, Whatsapp, Twitter and others.  According to the chief of women, children, seniour citizen (Cell) District Police Office, Banke Shyam Kumari paija, 6 child marriage were directly rescued from the ‘MANDAP’.

Thus, during lock down period, child marriage cases has been increased in lack of legal action by government bodies and public representatives, Misuse of social media (love affaire of teenager) by young sters and psychosocial problem caused by home quarantine (mobility restriction), insufficient parental care, counselling and guidance to the adolescent girls and boys and domestic violence (disputes and conflicts of parents and other family members).

As we are moving forward covidifying the things and programs, government (local, province and national) need to take step in reducing child marriage issues. They need to endorse the drafted policies and procidures, strategies, guidelines against child marriages. They need to allocate budget for the addressing the issues. Not only this, they should implement the allocated budget in field and monitor the proper utilization of the resources or not. Police administration and government bodies must work together to reduce the issue. Collaboration is required among government, non-government organizations, child rights activits, child clubs and adolescnet girls club, media and public to end this culprit from our society, community and country. Child marriage should be abolished to ensure child rights, to save girls life, infant’s life and ensuring equal development of girls and boys. Let’s end the child marriage from Nepal by 2030. Trainee journalist 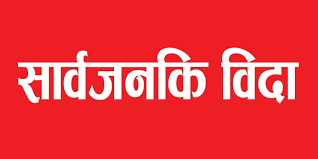